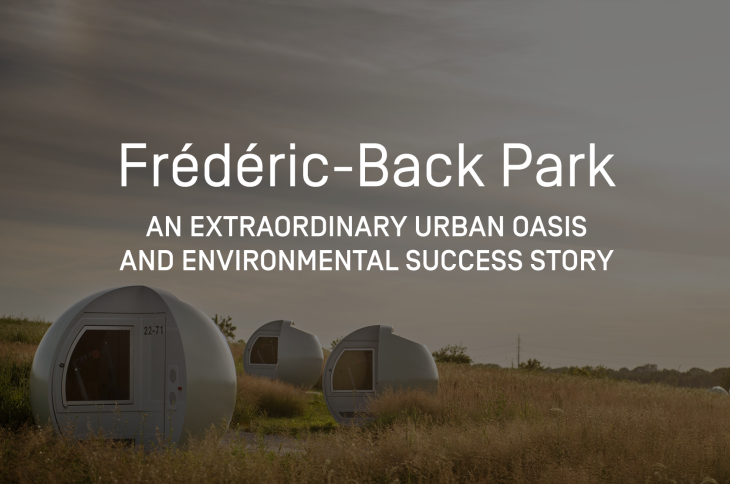 Looking for a change of scenery without leaving Montreal proper? Then the very sleek aesthetic of Frédéric-Back Park should be right up your alley. Visit and you’ll get the feeling you are miles away from the city — maybe even light years away. Take in the open stretches of land, cliffs, hills and faraway horizon. Close your eyes. Hear the black vulture whooshing through the air with its impressive wingspan? The sunflowers stretching skyward? The rhythmic sounds of runners passing by? It’s enough to make you forget that below your feet — beneath this beautiful revitalizing project — lies a mountain of trash.

Let’s go back in time to when the north-Montreal neighbourhood of Saint-Michel sprung up between two manmade holes in the earth. In the 1920s, Saint-Michel was flanked by two quarries separated by only a few kilometres: on one end was the Miron limestone quarry, and on the other, the Francon stone quarry. The former became a landfill, then Frédéric-Back Park, and the latter now serves as the city’s snow depot. Between them today: a neighbourhood undergoing rapid development.

The park was inaugurated in 2017 as part of Montreal’s 375th anniversary celebrations. A lot of people expected that Saint-Michel would figure in the park’s official name, and although the Frédéric Back moniker caught many by surprise, there was broad consensus supporting it almost immediately. The acclaimed Montreal artist, filmmaker and pioneering environmental activist’s name lends itself well to the park’s environmental rehabilitation story, as does the Academy Award winner’s ecologically engaged work (e.g., The Man Who Planted Trees, which earned Back one of his two Oscars).

The man who planted a pine

A work of public art titled Anamnèse 1+1 (in English, anamnesis refers to remembering things from a previous existence) now stands in the park and took two years for artist Alain Martin-Richard to complete. It’s an imposing rectangular prism made of cast aluminum and bundles of fabric recovered from local residents. Martin-Richard also planted a jack pine inside the piece to allow nature to reclaim the space. Given that the park sits atop millions of tonnes of waste, and thus the grounds do not allow for certain kinds of vegetation to flourish, the choice of a jack pine was a bold one. In the end, the pine failed to thrive and was replaced by a sumac, a species that has proliferated onsite despite the extreme conditions.

Frédéric-Back Park is also home to diverse flora and fauna. Birdwatchers can get their fill here, where bird-of-prey sightings abound. Already spotted on the grounds: the black vulture, the American kestrel and even the peregrine falcon. In addition to hares and groundhogs, coyotes have also set up shop in the park.

In addition to sumacs, you can spot several kinds of shrubs, sunflowers and native plants, which weave together to form a landscape that is akin to a wild meadow. That said, everything at Frédéric-Back Park has been carefully considered. Also part of the plan: a lake for both fish and pedal boats.

On the east side of the park, a futuristic landscape unfolds all around, sprinkled with white spheres. The path leads to a vista point with a view Mount Royal and Saint Joseph’s Oratory. It’s the perfect date spot come sunset, when the spheres’ glow-in-the-dark surfaces add to the idyllic, hushed ambiance and create just enough light to keep the pitch black at bay.

The many spheres here are connected to a network of underground pipes, part of a system that captures biogas from the ground and redirects it to the electricity-producing Biomont biogas cogeneration plant, which provides energy for the equivalent of nearly 2,000 homes. Methane creates 24 times more pollution than CO2, so capturing it before it enters the atmosphere is essential. The energy created by this process partially heats the park’s reception centre, a.k.a., TOHU, Montreal’s one-of-a-kind performance complex, located in world-renowned circus arts hub Cité des arts du cirque.

TOHU offers a wide variety of free year-round activities in the park, including guided tours, yoga classes and tai chi sessions, as well as bike and cross-country ski rentals. You can enjoy all of the park’s features and activities by reserving your spot online. So go ahead, stay in town and get your nature fix!

FIND OUT MORE about TOHU and the history behind its completely unique location. 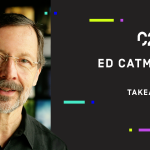 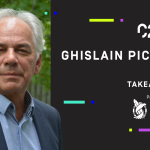